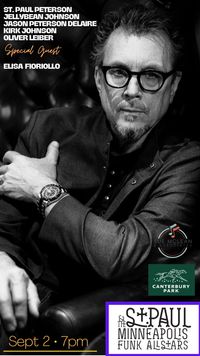 St. Paul and the Minneapolis Funk All Stars

St. Paul Peterson, a teenage wunderkind who performed keys with The Time in Purple Rain before signing to Prince’s Paisley Park label as lead singer of The Family is acknowledged as one of the best musicians to emerge from the Twin Cities. He is joined by Kirk Johnson on drums (Prince and the NPG), Elisa Fiorillo on vocals (Prince and the NPG), Jellybean Johnson on guitar (The Time/The Family/fDeluxe, Oliver Leiber on guitar (Tamara and the Scene/Jesse Johnson) and Jason Peterson DeLaire on sax, vocals and keys (Carmen Electra/Solo)