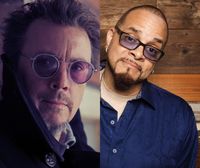 Sinbad and St. Paul and the Minneapolis Funk All Stars

Ranked by Comedy Central as one of the “100 Greatest Standups of All-Time,” actor and comedian Sinbad has had audiences laughing for over three decades. Sinbad has recently appeared on Comedy Bang Bang, The Eric Andre Show, and FX Television series It’s Always Sunny in Philadelphia. Sinbad produced and starred in his own WE TV’s reality show, SINBAD: It’s Just family.

St. Paul Peterson performed keys with The Time in Purple Rain before signing to Prince’s Paisley Park label as lead singer of The Family, is acknowledged as one of the best musicians to emerge from the Twin Cities.

Players who wrote, produced, performed or sung on some of the biggest hits from the era – from “Funkytown” to “Little Red Corvette,” “Black Cat” to “Nothing Compares 2 U” – St Paul and The Minneapolis Funk All-Stars are the architects of an electro funk-rock sound that brought together people of all colors and backgrounds; a style whose influence continues to ripple throughout pop music to this day with artists such as Questlove and The Roots, D’Angelo, Bruno Mars, Dam-Funk and many more.